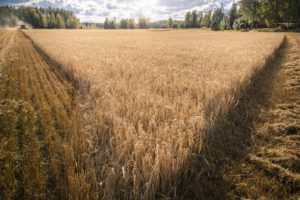 For cultivation of malting barley, an organic farming system means reaching a good barley yield together with high malting quality without any help of synthetic fertilizers or pesticides. Green manure grass, livestock manure and processed animal waste are used as fertilizer. Weeds are treated mechanically and kept under control with wide crop rotation. Together with good water management and natural liming materials, crop rotation also  helps to maintain a good growth ability of the soil. Plant diseases are controlled by crop rotation, good care of plant waste and by using a choice of well-adapted and resistant varieties. At the beginning, there was only limited field data available to support the selection of the best malting barley varieties for organic production, so we have been working to generate such data in several Viking Malt countries.

Barley is said to be one of the most difficult plants to grow in organic farming. Barley’s rhythm of growth is fast, and nitrogen has to be available at the start of the growing period, which is a challenge with organic, typically slow releasing fertilizers. This also relates to the general expectation that the biggest quality challenge in organic malting barley would be reaching the optimum protein level. It has also been stated that barley’s competitiveness against weeds in not that good because barley does not shade. Therefore, the challenges on the field are high.

Within recent years, organic farming of malting barley has increased. It is mostly effective and professional, with sufficient growing area for malting barley to fit into the annual crop rotation. Recent results show that the decent malting barley quality can be achieved with the  following preconditions:

Anyhow, due to the heterogenous quality of batches, the need for longer processing time and higher conversion factor, there are challenges in malting process compared to conventional barley. Also in the field, especially in extreme crop conditions, it is tough for a crop to manage without the help of synthetic plant protection. Therefore, the risk of crop loss is bigger and the yields in organic production are lower compared to conventional farming

Situation in the Viking Malt countries 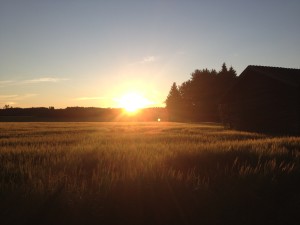 Sweden: Swedish Alcohol Monopoly Shop (Systembolaget) was a big driving force in increasing the organic malt usage by setting up a target for organic beers in their product selection. They stated that 10 % of all sold beer in their shops should be organic and during a certain time period, new beer products were allowed only if they were organic. This led to a shortage of Swedish Organic Malting barley and a need for import. However, a lot of effort was made to improve the situation  under 2016 and 2017, such as:

Denmark: Here our efforts on Organic malting barley growing are showing results so that from crop 2017 we can produce all Organic malt from Danish grown malting barley exclusively. As a lead to increase availability further, we have started to grow also organic winter malting barley for the crop 2018.

Finland: Viking Malt together with its stakeholders has been successful in encouraging farmers to start to grow organic malting barley. With northern crop conditions and hard winters, there is an advantage that we don’t have as many problems with plant pests. This advantage is especially important in organic farming where use of synthetic pesticides is not allowed. For northern conditions, the adaptation to different growing conditions, disease resistance, fast nutrient uptake ability and competitive ability are the main goals to achieve in breeding malting barley varieties and they all favor organic farming system as well. Knowledge of organic farming of malting barley has increased with organic variety trials and educational farmer seminars, but especially through practical farming.

Lithuania: There is a lot of organic cereals grown in Lithuania, including also malting barley. We exported from Lithuania to Denmark and Sweden when we had a deficit there. However, right now local organic malt demand in Lithuania is rather limited.